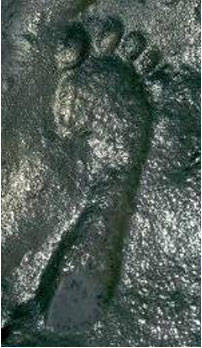 You could see a human footprint like this today on any beach or patch of mud. But this footprint -- clearly from the anatomy of a modern human being -- is fossilized in stone estimated to be about 290 million years old.

The discovery was made in New Mexico by paleontologist Jerry MacDonald in 1987. There were fossil footprints of birds and other animals, but MacDonald was particularly at a loss to explain how this modern footprint could possibly have been cast in Permian strata, which dates from 290 to 248 million years ago -- long before man (or even birds and dinosaurs for that matter) existed on this planet, according to current scientific thinking.

In an article that Smithsonian Magazine ran in 1992 about the discovery, it was noted that paleontologists call such anomalies as "problematica." Big problems indeed for scientists.

It's the white crow theory: All we have to do to prove that not all crows are black is to find just one white crow.

Similarly: All we have to do to prove that the history of modern man (or possibly how we date strata) is to find a fossil like this. Yet, scientists just put it on a shelf, label it as "problematica" and continue in their rigid beliefs because the reality is too inconvenient.

Is that good science?