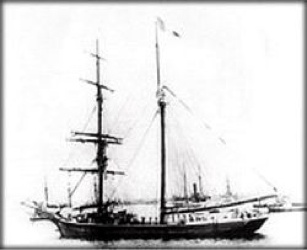 Mary Celeste was launched in Nova Scotia in 1860. Her original name was “Amazon”. She was 103 ft overall displacing 280 tons and listed as a half-brig. Over the next 10 years she was involved in several accidents at sea and passed through a number of owners. Eventually she turned up at a New York salvage auction where she was purchased for $3,000. After extensive repairs she was put under American registry and renamed “Mary Celeste”.

The new captain of Mary Celeste was Benjamin Briggs, 37, a master with three previous commands. On November 7, 1872 the ship departed New York with Captain Briggs, his wife, young daughter and a crew of eight. The ship was loaded with 1700 barrels of raw American alcohol bound for Genoa, Italy. The captain, his family and crew were never seen again. The ship was found floating in the middle of the Strait of Gibraltar. There were no signs of struggle on board and all documents except the captain’s log were missing.

The fate of her crew has been the subject of much speculation. Theories range from alcoholic fumes, to underwater earthquakes, to waterspouts, to involving  extraterrestrial life, sea monsters, and Bermuda Triangle. The Mary Celeste is often described as the archetypal ghost ship, since she was discovered derelict without any apparent explanation.