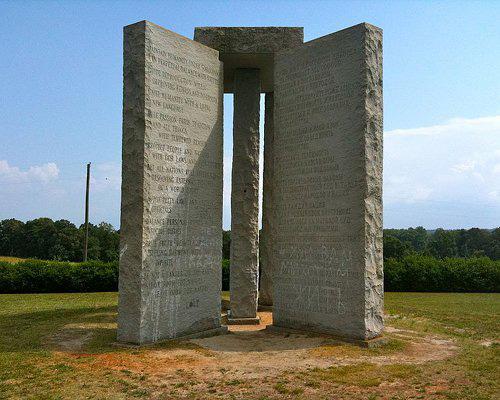 The Georgia Guidestones, sometimes referred to as the "American Stonehenge," is a granite monument erected in Elbert County, Ga., in 1979. The stones are engraved in eight languages — English, Spanish, Swahili, Hindi, Hebrew, Arabic, Chinese and Russian — each relaying 10 "new" commandments for "an Age of Reason." The stones also line up with certain astronomical features.

Though the monument contains no encrypted messages, its purpose and origin remain shrouded in mystery. They were commissioned by a man who has yet to be properly identified, who went by the pseudonym of R.C. Christian.

Of the 10 commandments, the first one is perhaps the most controversial: "Maintain humanity under 500,000,000 in perpetual balance with nature." Many have taken it to be a license to cull the human population down to the specified number, and critics of the stones have called for them to be destroyed. Some conspiracy theorists even believe they may have been designed by a "Luciferian secret society" calling for a new world order.