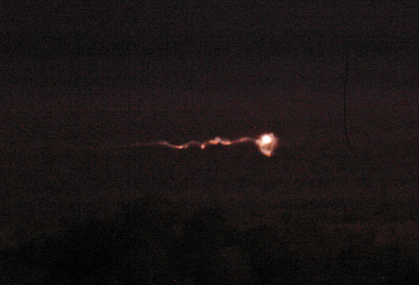 The Marfa lights or the Marfa ghost lights are unexplained lights (known as “ghost lights”) usually seen near U.S. Route 67 on Mitchell Flat east of Marfa, Texas, in the United States. Sightings are reported occasionally and unpredictably, perhaps ten to twenty times a year.

The first published account of the lights was written in 1957, and this article is the sole source for anecdotal claims that the lights date back to the 1800s. Reports often describe brightly glowing basketball sized spheres floating above the ground, or sometimes high in the air. Colors are usually described as white, yellow, orange or red, but green and blue are sometimes reported. The balls are said to hover at about shoulder height, or to move laterally at low speeds, or sometimes to shoot around rapidly in any direction. They often appear in pairs or groups, according to reports, to divide into pairs or merge together, to disappear and reappear, and sometimes to move in seemingly regular patterns. Their sizes are typically said to resemble soccer balls or basketballs.