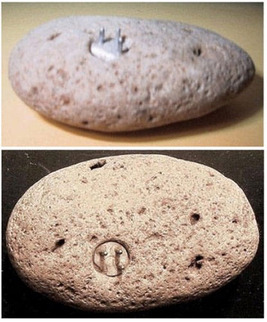 A man by the name of John Williams said that he found this artifact while hiking in a remote rural area. He had passed through some bushes in his shorts, and when he looked down to see how badly his legs might be scratched, he found this unusual rock.

The rock itself isn't unusual, except for the fact that it has some kind of manufactured thing embedded in it. Whatever it is has three metal prongs sticking out of it, as if it's some kind of connector.

The spot where he found it, Williams said, is "at least 25 feet from the nearest trail (which was dirt and faint), not near any urban areas, industrial complexes, electrical or electronic establishments, nuclear facilities, airports, or military operations (that I was aware of)."

The rock is natural quartz and feldspar granite, and such rocks to not form, according to geology, in a matter of decades, which is what would be required if the anomalous object were made by modern man. No, Williams estimates the rock to be about 100,000 years old.

So who was around then to make such an object?