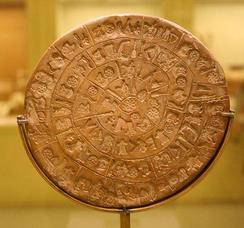 The mystery of the Phaistos Disc is a story that sounds like something out of an Indiana Jones movie. Discovered by Italian archaeologist Luigi Pernier in 1908 in the Minoan palace-site of Phaistos, the disc is made of fired clay and contains mysterious symbols that may represent an unknown form of hieroglyphics. It is believed that it was designed sometime in the second millennium BC.   Some scholars believe that the hieroglyphs resemble symbols of Linear A and Linear B, scripts once used in ancient Crete. The only problem? Linear A also eludes decipherment.    Today the disc remains one of the most famous puzzles of archaeology.