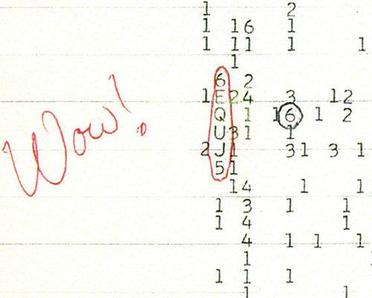 One summer night in 1977, Jerry Ehman, a volunteer for SETI, or the Search for Extraterrestrial Intelligence, may have become the first man ever to receive an intentional message from an alien world. Ehman was scanning radio waves from deep space, hoping to randomly come across a signal that bore the hallmarks of one that might be sent by intelligent aliens, when he saw his measurements spike.   The signal lasted for 72 seconds, the longest period of time it could possibly be measured by the array that Ehman was using. It was loud and appeared to have been transmitted from a place no human has gone before: in the constellation Sagittarius near a star called Tau Sagittarii, 120 light-years away.   Ehman wrote the words "Wow!" on the original printout of the signal, thus its title as the "Wow! Signal."   All attempts to locate the signal again have failed, leading to much controversy and mystery about its origins and its meaning.