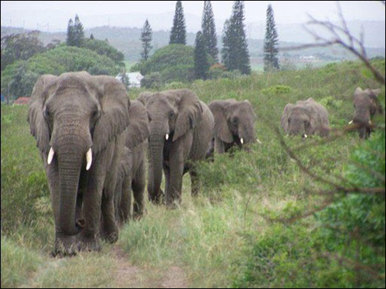 Lawrence Anthony, a conservationist and author known as "The Elephant Whisperer", passed away. After his death, although they were not alerted to the event, a group of wild elephants Anthony helped to rescue and rehabilitate travelled to his house in the South African province of KwaZulu-Natal. They stood around the house in an apparent vigil for two days, and then dispersed. Today, the elephants are "completely wild and doing fine" according to Graham Spence, Anthony's brother-in-law and co-author of three books.

At Thula Thula, the reserve where Anthony lived and where the elephants are today, his son Dylan Anthony continues his father's work through the Earth Organization, which Lawrence founded in 1998. Dylan is also continuing his father's legacy with another wildlife project in a rural area called Camperdown outside Durban, South Africa.

In April, the University of KwaZulu-Natal's College of Agriculture, Engineering and Science posthumously awarded Lawrence an honorary Doctor of Science degree. Dylan spoke about his father at that event. You can see the speech he gave below (Dylan's speech begins at 2:22):

Lawrence Anthony was a conservationist and author known as "The Elephant Whisperer" who passed away on March 2nd. In 1999, Anthony rescued and rehabilitated a group of wild South African elephants who were deemed dangerous. And the animals appear to remember what he did for them: when Anthony passed away, a group of elephantsvisited his house in the South African KwaZulu for a two-day vigil, according to his family.

Anthony, who grew up in rural Zimbabwe, Zambia and Malawi, was known for his unique ability to communicate with and calm traumatized elephants. In his book 'The Elephant Whisperer: My Life with the Herd in the African Wild', he tells the story of saving the elephant herds, at the request of an animal welfare organization.

When Anthony died of a heart attack, the elephants, who were grazing miles away in different parts of the park, travelled over 12 hours to reach his house. According to his son Jason, both herds arrived shortly after Anthony's death. They hadn't visited the compound where Anthony lived for a year and a half, but Jason says "in coming up there on that day of all days, we certainly believe that they had sensed it".

While it's hard to say how they could have sensed that Anthony had died, elephants are known for their grieving rituals, both in the wild and in captivity. According to many researchers, elephants grieve the deaths of their relatives, as when a child or parent dies.

To find out more about Anthony's life and work - among his many achievements are the founding of conservation group The Earth Organization in 2003, and rushing to the Baghdad Zoo to protect the animals that remained alive there after the American invasion of Iraq - check out his obituary in the New York Times.