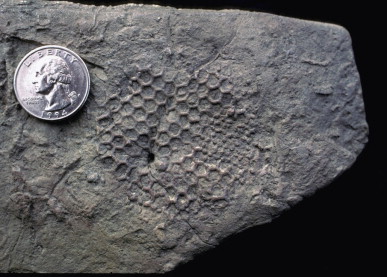 Paleodictyon is a pattern, usually interpreted to be a burrow, which appears in the geologic record beginning in the Cambrian and in modern ocean environments.[1][2][3] Both irregular and regular nets are known throughout the stratigraphic range of Paleodictyon, but it is the striking regular honeycomb pattern of some forms such as P. carpathecum and P. nodosum which make it fascinating and widely studied. Individual mesh elements may be millimeters to centimeters, and entire mesh patterns can cover areas up to a square meter. The edges or threads that make up the mesh are usually cylindrical or ellipsoid in cross-section, and some forms have vertical tubes connecting the mesh upwards to the sediment-water interface.Dolf Seilacher proposed in 1977 that it may be a trap for food, a mechanism for farming, or a foraging path.[4] Alternatively, it has been suggested that it may be a cast of a xenophyophoran protist.[1]

Much modeling work has been done on Paleodictyon. Roy Plotnick, trace fossils researcher at University of Illinois at Chicago, modeled the form as resulting from the iterative modular growth of an unknown organism.[5] Garlick and Miller modeled it as a burrow with a relatively simple burrow algorithm.[6]Subsequent observations on Paleodictyon using Euler graph theory suggest that it cannot be an excavation trace fossil, and that it must therefore be an imprint, body fossil, or be of abiotic origin.[7]

The IMAX film Volcanoes of the Deep Sea describes the search for a living animal that produces the Paleodictyon, using the deep-water submersibleDSV Alvin near volcanic vents that lie 3500 meters (12,000 feet) underwater in the Mid-Atlantic Ridge. They found and took samples from many of thePaleodictyon nodosum honeycomb burrows, however no creatures were found in any of them. They theorized that the burrows were being used for bacterial farming by whichever creature created them.