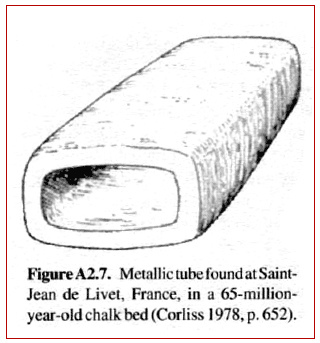 Humans were not even around 65 million years ago, never mind people who could work metal. So then how does science explain semi-ovoid metallic tubes dug out of 65-million-year-old Cretaceous chalk in France? In 1885, a block of coal was broken open to find a metal cube obviously worked by intelligent hands. In 1912, employees at an electric plant broke apart a large chunk of coal out of which fell an iron pot! A nail was found embedded in a sandstone block from the Mesozoic Era. And there are many, many more such anomalies.What are we to make of these finds? There are several possibilities:

In any case, these examples - and there are many more - should prompt any curious and open-minded scientist to reexamine and rethink the true history of life on earth.