The disappearance at Eilean Mor Lighthouse 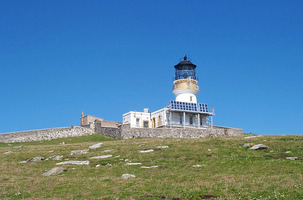 The Outer Hebrides island chain off the western coast of Scotland is one of the most remote locations in the world, bedrock formed of ancient metamorphic rock

home to the Carloway Broch, and Loch Ness and its famous monster. The Flannan Isles, also known as the Seven Hunters, are seven uninhabited islands on the western-most edge of the chain; and in December 1900, the largest of these -- Eilean Mor (Gaelic for “Big Island”) -- became the site of an unsolved mystery when three lighthouse keepers vanished without any apparent explanation.

The Atlantic Ocean off the Flannan Isles is rough and treacherous. So many ships had been lost there that in 1895, a lighthouse was finally built on Eilean Mor – an undertaking of considerable logistical difficulty as the building materials had to be hauled up a 150 foot cliff (45 meters.) Once construction was finished, three lighthouse keepers were installed: head keeper James Ducat, first assistant Thomas Marshall, and second assistant Donald McArthur. All three men were seasoned veterans of the storms; Ducat, 43, had over 20 years experience at lighthouse keeping, while Marshall and McArthur were both seamen.

The keepers worked on a rotating watch of 14 days; food and supplies were brought to them as weather permitted. In mid-December, one of the three was due to return to the mainland for a break, to be replaced by a keeper named Joseph Moore.

Stormy weather began churning the seas again the very next day. It wasn’t until one day after Christmas that the weather calmed sufficiently to allow the SS Hesperes to land Joseph Moore on the island for his replacement shift. The keeper who he was slated to replace was supposed to be waiting for him on the island’s east landing. But no one waited at the jetty which Moore noted had been terribly damaged by the storms.

Panicked, Moore ran to the lighthouse. There he found the ashes of a cold fireplace and an upended chair as though the person sitting in it had stood up very quickly. On the kitchen table sat a half eaten meal of salted mutton and potatoes. Missing was a toolbox, and two sets of oilskins and boots belonging to James Ducat and Thomas Marshall. The final entry in the logbook, recorded by James Ducat at 9am on December 15, read, “Storm ended, sea calm. God is over all.”

No other signs of the missing men were ever found.

When Moore and the Hesperes crew explored the island, they found that even more damage had been sustained by the windward side of the island. The jetty was twisted; the ropes and jibs of the platform used to hoist supplies scattered about; the iron staircase on the side of the cliff twisted and misshapen.

An official investigation launched into the disappearance of the lighthouse keepers concluded that the men might have taken advantage of the break in the weather to explore the damage on the western side of the island. There they may have been swept away by a giant wave. But that conclusion doesn’t explain the signs of hurried leave-taking found in the men’s living quarters.

Various interpretations were offered. Perhaps one of the men had been driven mad by the inclement weather and had turned on his colleagues, before hurling himself in the ocean. Perhaps mold had grown in the men’s food, poisoning it with a hallucinogenic substance.

Eilean Mor was once a Viking outpost, and a ghostly Viking longboat was said to haunt the local seas. Indeed, the crew of the Fairwin – one of the vessels sent out to investigate why the lighthouse had gone out on December 15 – reported seeing a ghostly longboat on that night, crewed by warriors with faces the color of bone: Three men in oilskin raingear were rowing that boat. Could the lighthouse keepers have run afoul of ancient ghosts?

Whatever the truth, the mysterious disappearance of the Eilean Mor lighthouse keepers remains one of Scotland’s most enduring mysteries.